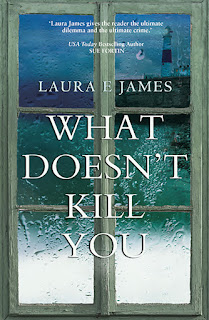 What doesn't kill you makes you stronger - but how strong can one person be?
Griff Hendry knows what it is to be strong. After a turbulent past, he's dedicated himself to saving lives, working as a coastguard along the breath- taking shores of Dorset. It's Griff's belief that everyone is worth saving - which is why he can't forgive his father, Logan, for what he did.
Griff's future is plunged into uncertainty when his wife, Evie, tells him she wants a separation. The revelation is a shock and leads Griff to question what Evie could possibly be hiding - and she isn't the only one holding back. Griff's troubled stepdaughter, Tess, also harbours a dark secret.
As the truth is uncovered, Griff is forced to accept that perhaps he's never understood what real strength is.

We are delighted to have Laura James join us today to talk about her new book.
Welcome to Sincerely Book Angels blog.
Thank you so much for inviting me onto your blog and Happy New Year to you and your readers.


What was the inspiration behind this novel?
Initially, with What Doesn’t Kill You, the third, but standalone book in the Chesil Beach series, I wanted to examine the dynamics of a marriage gone wrong – what caused the problem, what would it take to get the couple together, how would the family react? Then when Britain, and in particular the south west coast, was hit by dreadful storms early 2014, I had the starting point for the novel – actual storms and metaphorical storms creating havoc for the hero, Griff Hendry, a coastguard. 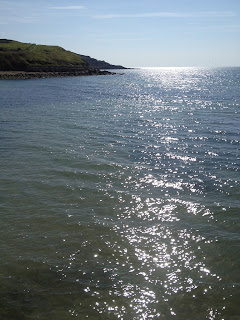 Did you always want to be a writer?
I’ve always adored music, reading and stationery, so I think the clues were there from an early age. I’d spend hours on my own in my bedroom, listening to my favourite bands, and drawing, writing, or colouring. I produced my own comics, I’d write alternative lyrics to well-known tunes, and I’d put plays together. It was when I was studying for my A levels that the passion really took hold. I studied English and Theatre Studies, and loved every minute, and at that time I read Bram Stoker’s Dracula, and was so taken with a particular sentence that I was inspired to write a poem based on that line. It had such a beautiful rhythm to it. I entered my poem into the Hastings Poetry Festival and it was highly commended. It was a long time ago, but it encouraged me to keep writing.


What other jobs have you had?
I’ve worked in Personnel for the NHS, I was once an admin assistant at a local Watford newspaper, and I’ve worked in the insurance industry. My first job was in Ladies Fashion in British Home Stores. It was a Saturday job and I earned £9.60 for eight hours work. I recall spending my first three weeks pay on a 9ct gold necklace for my mum, which has now found its way back to me. I’m also a qualified part-time youth worker, but I think I’d have to take a refresher course if I ventured into that field again. I stopped when I was expecting my own youth.


How did it feel when your first novel was published?
I remember the moment Truth or Dare? went live. I was in my car, having left the doctor’s surgery, when I checked my email on my phone and found a notification advising the book was up on Amazon. I was so excited and wanted to share the news, but I had to wait until later that day as I was busy that morning. It was difficult to focus on anything else, though.


Once I returned home and accessed my pc, the nerves kicked in. It dawned on me that my book, the story I’d written over a seven year period, was now out there for anyone to read. What if readers didn’t like it? What if friends read it? What if I let the reader down?


A wonderful writer friend reassured me, saying the publisher had faith in it and it wouldn’t have reached publication if it was sub-standard.


That was over three years ago.


Can you please tell us a little about your publishing story.
Knowing I was going into hospital for surgery to my left wrist, my mum passed me Jill Mansell’s Good At Games to read. I devoured the first half while waiting to go into theatre, and finished the book the next day. I loved it so much, I read through the additional pages at the back, which included a note from Jill Mansell explaining she was a member of the Romantic Novelists Association. When I investigated the RNA further, I discovered the New Writers’ Scheme – a scheme whereby, once a year, aspiring authors could have their manuscripts read and critiqued by an established author (a full member of the RNA). Having said many times to my family that I would one day write a novel, and being laid up with a hefty back slab cast on my left arm, I decided it was the perfect time to start writing.


I was fortunate to secure a place on the NWS the following January, and submitted Truth or Dare? for critiquing later that year. It went through the scheme twice and was picked up by Choc Lit. The NWS is an excellent scheme which allows you to develop as a writer, and the critiques and the RNA are priceless. I have learned so much and met so many fabulous, genuine and generous people. It changed my life.


Have you ever had writer's block? If so how did you overcome it?
No. I’ve had times when fatigue, pain or grief have knocked the stuffing out of me and I’ve stepped back from the writing, and recently I’ve set aside a work-in-progress with which I’ve been battling for over a year because it wasn’t working, but that’s not writer’s block.


I have rheumatoid arthritis and now fibromyalgia, so I have to manage my days according to how well I’m feeling and there are days when I can’t focus or get words onto the page, but that’s just how it is. Sometimes it’s good to have a little breathing space.


What motivates you to keep writing?
I love exploring relationships and issues and writing allows me to do this. I also adore words and their rhythms, and am thrilled when readers let me know they’ve enjoyed or been touched by the themes or characters in the books – that’s fabulous motivation to keep going.


Where is your favourite place to write? ( can we have a picture)
On a warm, sunny day, I head off to a beachside café, and on other days, I write from home. My desk is in the kitchen-diner. It’s handy. Close to the kettle. And the fridge. 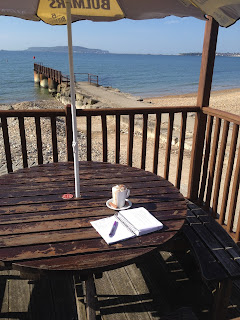 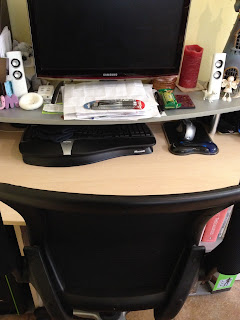 Do your characters moods ever affect your mood and vice versa?
Tears were shed in the writing of What Doesn’t Kill You, and I felt guilty at what I put the characters through. I talk to my family about Griff, Evie and Tess as if they are real, and when we visit Portland, where some of the story is set, I point out the characters’ favourite places. I’m always in character when writing, so I probably am affected by their moods, but I don’t think I carry that on once I’ve finished for the day. Great question. It has me thinking. Might have to ask the family.


What three pieces of advice would you give to an aspiring writer?
If you write, you are a writer.


What are you reading at the moment?
All That Is Left Of Us, Catherine Miller. Gorgeous read.


If your book was made into a film what song would you choose for the opening credits?
Oo. Great question. I think it would have to be Kelly Clarkson’s Stronger (What Doesn’t Kill You), as this song helped get me through a tough time and led me to think about how people overcome difficulties and how the experience has changed them.


Or would it be better at the end of the film?


I’d love to have the opportunity to find out.


Who would you choose to play your favourite character in the film of your book?
Griff is the hero of What Doesn’t Kill You and he bears a striking resemblance to TV wildlife presenter Steve Backshall … On the actor front, Matt Damon, but he’d have to dye his hair and maybe wear coloured contact lenses. Henry Cavill would work, too.


What is your next book about?
It’s in the early stages, but I can tell you it looks at the mother/daughter relationship.


And now think about the books you've read and just give the first one that comes into your head for our quickfire 'Which book round.'


Which book has made you:


Cry your heart out?
Love and Devotion, Erica James. Comes with an emotional punch.


Wish it would be made into a film?
There’s No Such Thing As Immortality, Sarah Tranter.


Scared?
The Amityville Horror. I was a teen at the time. It scared the living daylights out of me.


Thank you so much for joining us on our blog today and good luck with the book.


Thank you for having me. I’m off to root out Cold Comfort Farm … 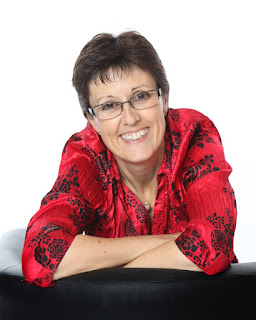 Possessing little in the way of domestic skills, and with an insatiable hunger to write, Laura E. James found a much better use than cooking, for the family kitchen. Tucked neatly in one corner is her very small, but very tidy desk from where she produces character and issue driven women's fiction, short stories and flash fiction. She considers her legendary affair with stationery, the urge to smell new books, and her mum's love of reading as the catalysts for writing.

Living in and enjoying the inspirational county of Dorset, her formative years were spent in Watford, a brief train ride away from the bright lights of London. Here she indulged her love of live music, and, following a spectacular Stevie Nicks gig, decided to take up singing, a passion that scored her second place in a national competition.

Now in her formed years, Laura is a graduate of the Romantic Novelists' Association's New Writers' Scheme, a member of her local writing group, Off The Cuff, and one eighth of 2015 RNA Industry Awards Media Star of the Year winners, The Romaniacs.

With her debut novel, 'Truth or Dare?', the first standalone in the Chesil Beach Books series, nominated for the Best Romantic Ebook 2013, her second, 'Follow Me Follow You', a 2014 Lovereading.co.uk editorial selection, and her third, 'What Doesn't Kill You', the first title under the new Dark imprint, Laura writes for the award-winning Choc Lit.
For further information, go to: