Author Q & A with Midge Raymond 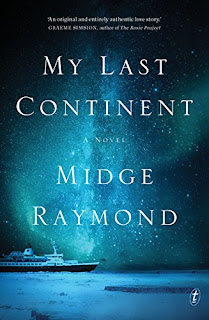 My Last Continent by  Midge Raymond (Out 28 July, Text Publishing).

Picking up huge praise from authors such as Graeme Simsion, Karen Joy Fowler and ML Stedman, My Last Continent is a summer must-read. Part love story, part elegy, and perfect for the ‘armchair adventurer’, the novel takes us to the end of the world – to the glacial mountains, cleaving icebergs, and frigid waters of Antarctica—where Deb Gardner and Keller Sullivan feel at home. For the few blissful weeks they spend each year studying the habits of emperor and Adélie penguins, Deb and Keller can escape the frustrations and sorrows of their separate lives and find solace in their work and in each other. But Antarctica, like their fleeting romance, is tenuous, imperiled by the world to the north…

Amongst its poetic prose and triangular love story, Raymond also takes a moving and memorable look at the effects of a warming world. She reveals the cute penguins of the Antarctic as extremely complex creatures with problems akin to those of humans – seeking long-lost mates, nurturing their chicks and adapting to suit their ever-changing surroundings. Matters of both the heart, and science are taken into consideration and it as beautiful as both the landscape and romance it describes. It’s heartfelt, it’s moving and above all…unique.

Author Q & A with Midge Raymond

Today we are delighted to welcome Midge Raymond to Sincerely Book Angels blog.

What was the inspiration behind this novel?
Antarctica has always been intriguing to me, and I was fortunate to have had the opportunity to visit in 2004. Several days into the journey, I witnessed a fellow traveller slip and fall on a patch of ice on the edge of a penguin colony. I appeared to be the only one who saw him, and fortunately he got up immediately, more embarrassed than injured. But already I’d been hearing concerns from our onboard naturalists about the dangers of accidents at the bottom of the world, I began to wonder: What if this man hadn’t gotten up? This question became the inspiration for a short story, and that story in turn grew into My Last Continent, which envisions an even larger accident in the Southern Ocean, one involving thousands rather than just one. 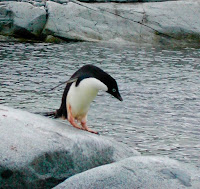 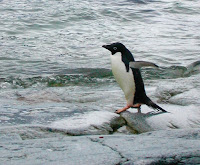 Did you always want to be a writer?
Yes, always. I’ve been writing since I was a  young girl, though as I got older I switched from making up stories to telling real ones. I published my first article in a local newspaper when I was fifteen years old and continued in journalism until my mid-twenties, when I returned to making up stories. I published my first short story in 1999; my first book, a short story collection, Forgetting English, in 2009; and my first novel, My Last Continent, this year.

What other jobs have you had?
I’ve been lucky to have always found work related to writing. I’ve worked in publishing, as a production editor as well as a copywriter; I’ve worked as a staff writer and editor; I’ve taught English as a second language as well as journalism and creative writing; and I co-founded a small press dedicated to environmental literature. It’s been wonderful because every job has helped me grow as a writer.

How did it feel when your first novel was published?
It has been very exciting, and I’ve loved every minute of getting MY LAST CONTINENT out into the world. I’m so fortunate to be working with fantastic publishing teams in many corners of the world.

Have you ever had writer's block? If so how did you overcome it?
Once I’m into a project, I rarely have writer’s block — but I often have trouble with the blank page. To get around this, I take a notebook and find some writing prompts (or make them up myself), and just freewrite until I have a foundation for a scene or a character.

What motivates you to keep writing?
It’s mostly the joy of doing it that motivates me, but I also think all writers need to have something to say to stay motivated, and for me, writing about the Antarctic and its magnificent creatures has been very inspiring. I hope that readers come away not only enjoying the novel but appreciating the continent as well.

Do your characters’ moods ever affect your mood and vice versa?
Definitely! The character of Deb in MY LAST CONTINENT, for example, grew from my anxiety about tourism in Antarctica and the fate of the penguins on a warming planet. So, while she is actually nothing like me, I channelled a lot of my concerns into her character. And if I’m working on a story that is really light or really sad, I sometimes take a little of this with me once I step off the page.

What three pieces of advice would you give to an aspiring writer?
1. Write what you want to write, not what you think others want to read.
2. Learn as much about the publishing industry as you can.
3. Never give up.

Which authors inspire you?
I love books that tell amazing stories related to animals and the environment, and a few favourites include Karen Joy Fowler’s We Are All Completely Beside Ourselves, Ann Pancake’s Strange As This Weather Has Been, and Barbara Kingsolver’s Flight Behavior.

What are you reading at the moment?
I just finished reading Adam Haslett’s Imagine Me Gone, and I’ve just started reading Colum McCann’s TransAtlantic. Next on my stack are Lionel Shriver’s new book, The Mandibles, and War of the Encyclopaedists.

If your book was made into a film what song would you choose for the opening credits?
I have no idea! But I think I would choose something instrumental rather than something with lyrics.

Who would you choose to play your favourite character in the film of your book?
I would definitely try to fit George Clooney into the film somehow, even if I had to create a new character.

What is your next book about?
My next book is still in its very early stages, but it looks as though it’ll deal with some of the same themes as MY LAST CONTINENT — isolation, nature, a catastrophic event — though everything else about it is completely different.

And now think about the books you've read and just give the first one that comes into your head for our quickfire 'Which book round.'

Which book has made you:

Laugh out loud?
Nora Ephron’s I Feel Bad About My Neck

Cry your heart out?
Karen Joy Fowler’s We Are All Completely Beside Ourselves

Want to read it again?
Lionel Shriver’s We Need To Talk About Kevin

Think more?
Just about anything by Margaret Atwood

Wish it would be made into a film?
I can’t think of one! I think most books are perfect as books.

Thank you so much for joining us on our blog today and good luck with the book. 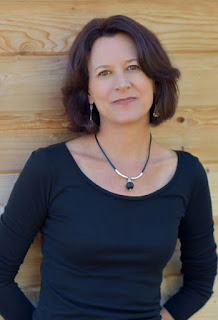 Midge Raymond is an award-winning short-story writer who worked in publishing in New York before moving to Boston, where she taught creative writing. She has published two books for writers, Everyday Writing and Everyday Book Marketing. Midge lives in the Pacific Northwest, where she is co-founder of the boutique publisher Ashland Creek Press. My Last Continent is her first novel. 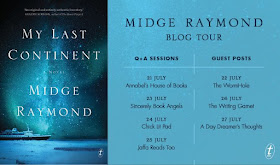